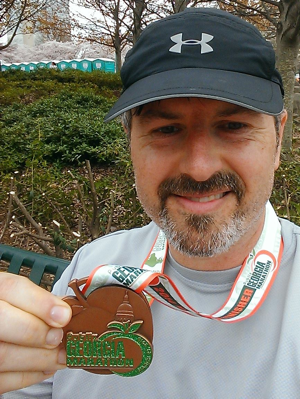 I finished a freaking marathon!

I ran the 2014 Publix Georgia Marathon in Atlanta on March 23. I got up at 4:00 AM, drove to the MARTA train station, and took the train to Centennial Park, where the race started and finished.

The weather was good for running a marathon. Temperatures were in the 50's, and the sky was covered with clouds. The forecast called for rain, but aside from a few sprinkles halfway through the race, we stayed dry.

I have previously run two half marathons with times around 2:10, so I was expecting my marathon time to be somewhere between four-and-a-half and five hours.

That was wildly optimistic.

The Georgia Marathon course is very hilly. The course I run when training has more hills than the average marathon course, I think, but it didn’t prepare me for this course.

For the first ten miles, I kept to my goal pace of ten and a half minutes per mile. After mile 12, I had to walk up most of the uphill stretches, and there were a lot of uphill stretches. After mile 21, I couldn’t even run on the downhill stretches anymore. My legs would cramp whenever I tried to run. I wasn’t even sure I’d be able to walk those last five miles.

My final time was 5:41, about an hour longer than I expected. I think I did everything right in terms of preparation, nutrition, hydration, and pacing. I just hadn’t built up the endurance to run 26 miles of hills.

But hey, I finished a freaking marathon.

My FitBit says I took over 54,000 steps (including steps walking to/from the marathon). I suspect that will be my daily step record for a while.

On mile 20, some spectators were handing out cups with a brownish liquid. I assumed it was iced tea, but was delighted to find that it was cold beer. I’d like to nominate those people for the Presidential Medal of Freedom.