Note: This is an old post. I now use jq (http://stedolan.github.io/jq/) instead of the formatjson Node script described below, and I recommend that you do too.

I had some JSON files that were not indented consistently. I edit these files by hand, so I wanted a way to easily reformat them.

My text editor has a reformatting command, but I really hate what it produces, so I decided to make my own JSON reformatting service for OS X that I could use in any application.

First, I wrote a Node.js script to do the reformatting:

Then I used Automator to create a service: 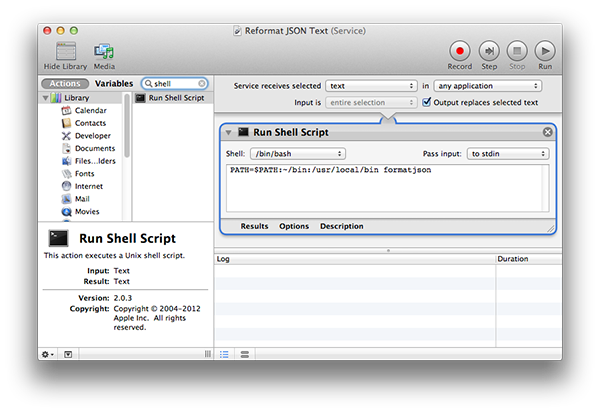 Now, whenever I want to reformat some JSON in a text editor, I just select it, right-click, and choose Services > Reformat JSON Text.

And when I want to reformat things from the command line, this works:

If you'd rather have a web page that does this, see A Web Page for Reformatting JSON Text.